Sydney Trains started off 2019 on the wrong foot last night, with a major system meltdown beginning around 6pm on New Years Eve and still continuing well into New Years Day.

As over a million people descended on Sydney Harbour for the famous midnight fireworks, the rail network began to crumble. Lightning strikes to critical rail infrastructure at both Central and Gordon started the domino affect necessary to cripple the network. At one point around 6:30pm no services were able to operate through the Suburban Platforms at Central Station. Initially minor signal failures were reported to be the cause. However this was later clarified to be major signal damage due to lightning, which too a number of hours to be rectified.

After the end of the celebrations and in the first few hours of 2019 was when the system saw major capacity issues. Customers attempting to enter both Wynyard and Town Hall stations found themselves being redirected to Central due to dangerous platform overcrowding. At Central, some people experienced crush injuries after a large majority of ticket barriers were closed to stem the flow of passengers. As a result, massive queues spilt out onto the roads at Central, with some people reportedly waiting over an hour just to enter the station. By this stage some trains were up to three and a half hours behind schedule, with one passenger reporting her train guard announcing something along the lines of “I wouldn’t rely on this train, I’d get a cab.” Despite claims all lines had a service every 15 minutes or better all night, some passengers complained that their line had seen no trains in over an hour at times. 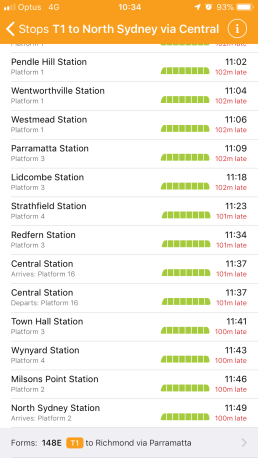 As the dawn broke on 2019 and New Years Day continued, so did the train delays. As of this morning there are still delays on every train line, including a number of services that are well over two hours behind schedule. Trains are running out of order and with changed stopping patterns. These delays are likely to continue all day, as the network struggles to cope with even small delays. As of 11am, trains were not running o the T6 and T7 lines, as well as being suspended between Blacktown and Richmond on the T1 line and Sutherland and Cronulla on the T4 line.

But of course this whole fiasco begs one question, Why? Why did this happen on the biggest night of the year for Sydney Trains, when hundreds of thousands of people are using the rail network all at once? Why does one signal being struck by lightning cause the entire network to collapse? Why does this keep happening? We have now seen major network meltdown after major network meltdown for over a year. The ill-flated Novemeber 2017 timetables have since been replaced with new timetables that cut services and increased the networks capacity to recover in March 2018, but still we constantly see this type of meltdown. Even if inclement weather was once again the cause, is it acceptable to still be seeing delays 18 hours later? Surely there should be a better signalling system than one that crashes at the sight of lightening.

These meltdowns are a sign of a critically overstretched rail network. Transport For NSW need to do more to ensure that this doesn’t continue to happen. It is all well and good to blame someone else for the troubles, but this government needs to fix the problem urgently. We often hear the blame laid on Labor for doing nothing in 16 years of government. But after eight years in power, the blame now surely falls to the incumbent Liberal government. Even if the network was in a crumbling state when they inherited it, surely eight years is enough time to put in even temporary measures to fix the network. Gladys Berejiklian and Andrew Constance, the ball is at your feet. In no way can you blame the frontline staff of the rail network like many frustrated passengers do, this is entirely the fault of upper management and government for years of underinvestment. Its an election year, surely the incumbent Liberals need to present a well running rail network and take some responsibility for the problems it faces if they want to be re-elected.

So once again its another year of the same problems aboard Sydney Trains. *Welcome to Sydney Trains, the next service to arrive is your late running*