It has been confirmed that the proposed rail line to Western Sydney Airport will be deliver and delivered by Sydney Metro. This comes alongside information provided to us that the government intends for all new rail lines in Sydney to be of a Metro Rapid Transit Standard.

The project is expected to form a North-South spine in the outer west, between Tallawong in the North and Macurthur in the South via St Marys, Western Sydney Airport and Narrellan. A heavy rail connect from the South West Rail Link at Leppington is also expected to be built.

The NSW Government today announced train services changes and improvements from 30 September to help support customers while the railway between Epping and Chatswood is upgraded to for the Sydney Metro.

Improvements include more services for stations north of Chatswood on the T1 North Shore Line and double the number of express trains running to and from the Sydney CBD via Strathfield during the peak for Central Coast customers.

Key adjustments on the rail system from 30 September include:

There will also be minor adjustments to some services on other lines.

Sydney has a long history with double deckers trains.  In this edition of Sydney’s Transport History, we will be delving deeper into their domination of Sydney’s suburban rail rolling stock.

In 1970, the first intercity Double Deck V-set trains entered service. At the time, these trains were described as the “most luxurious commuter stock in the world”. Delivered over 19 years, most of the newer sets are still in service.

In 1972, the first Comeng-constructed stainless steel double deck suburban power-cars entered service. These cars were originally paired with Tulloch trailer cars , but from 1973, Comeng Trailer cars entered service. Later in the 1970s,  A Goninan & Co constructed a number of similar cars. Whilst most of these 1970s sets have since been retired, 24 of them still operate as S sets on the T2, T3, T6 and T8 lines.

Goninan built the first air conditioned suburban trains in 1981, with 160 K sets being delivered through 1985. In 1986, similar C sets with more modern safety features were introduced.

Between 1988 and 1996, 530 “Tangara” cars were introduced. These trains marked the first major redesign for the suburban rolling stock since double decker trains were introduced were and were also the last publicly funded new train design in NSW. These new trains allowed for the fill retirement of single deck suburban services in 1993.

Millenium Trains were introduced in 2002 and have formed the basis of all new trains delivered since. These were the first passenger trains in NSW to include automated announcements and information displays. These M sets allowed for the retirement of the original Tulloch carriages.

55 four carriage OSCar sets were delivered between 2006 and 2012 that allowed the oldest V sets to be retired and some services to be increased form four to eight cars in length. The H sets allowed for the next generation features found on M sets to be available on longer Intercity services.

Waratah trains are the latest design of double decker trains to be deliver to the NSW government railways and the first model to be built outside of Australia. These Chinese built trains continue on the design of the Millennium with some m minor improvements. The original order included 78 8-Car A sets. From 2018, 24 8-Car B set trains will be introduced to replace the remaining 24 S-Set trains.

Following a successful trail of E-Paper real time timetables at two bus stops in the CBD earlier this year, the government has decided to proceed with the rollout of the technology.

First, they will be installed at the two bus stops at Sydney Airport, located outside the T1 International and T3 Qantas Domestic terminals. Servicing Sydney’s busiest bus route, the 400 from Bondi to Burwood via Eastgardens and Rockdale, the location was chosen as many customers boarding at these locations might not have access to apps with real time data as in many cases they have only just arrived in Sydney for the first time.

Believed to be an Australian first, the compact digital screens are a sustainable, solar powered and innovative solution to a previously paper based communication channel. Information used in the new signage comes from real-time bus data, populated by on-board GPS on each bus, giving customers helpful arrival and capacity information. The displays can also provide incident alert messaging for disruptions like road closures associated with special events like Mardi Gras and Anzac Day, or unplanned disruption like a traffic incident affecting the broader network.

The technology will be installed at two airport stops ahead of the September school holidays.

From September 23 2018, there will be major service changes to bus services in the Eastern Suburbs. Route 333 will become a high frequency high capacity turn up and go service, running 24 hours.

Additionally, Routes 382, X79 and X84 from North Bondi and the 361 from Tamarama will be discontinued and routes L24, 380 and 381 will have major service alterations. Elsewhere, many routes will have timetable changes.

Full Details of changes below; 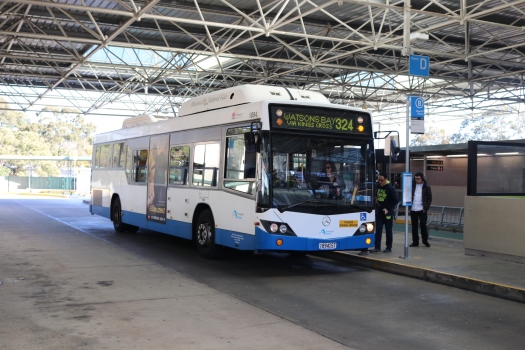 The original route 324 ran between City, Macquarie Street to Watsons Bay, running express between the City and Rose Bay began on 23 January 1950 after the closure the tram line between Rose Bay and Watsons Bay closed late in December 1949. Just five months later due to large protests, Route 324 was axed and the tram returned to service.

The service was reintroduced after the second closure of the tram line to Watsons Bay on 10 July 1960. It ran between Watsons Bay and Erskine Street Wharf. From 1966 the route began terminating at Circular Quay instead of Erskine Street. From 1979, the route was diverted to use the new Edgecliff Interchange and short runnings between Watsons Bay and Double Bay were extended to Edgecliff and renumbered 323. From 4 October 2015, the 324 was modified to operate to Walsh Bay instead of to Circular Quay as part of changes to the CBD bus network related to light rail construction.,

The route currently operates every 30 minutes through most of the day. During peak hour, services run the full length of the route every 20 minutes, alternating with a short running between Watsons Bay and Edgecliff Station also running every 20 minutes. This provides an overall frequency of 10 minutes between Watsons Bay and Edgecliff and encourages interchange to rail services.

I am a high school student from Sydney, Australia with a passion for transport. I have a particular interest in planning and operations and a love for buses and aviation.