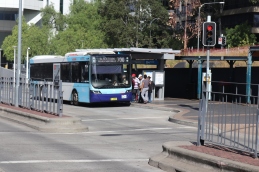 This route dates from April 2, 1982, when a number of local bus routes from the 1925 bus numbering system were renumbered and re routed into the 700. This original service was operated by Western Road Bus Services. In 1987, the route was acquired by Toongabbie Buses and then later in December 1988, it was acquired by WestBus.

From December 3, 1994 the 700 was rerouted via Blacktown Rd direct, instead of operating via Hayes Road through Seven Hills. Subsequent changes of hands saw WestBus bought out by National Express Group and then later ComfortDelGro Cabcharge. In May 2004, the operating name of WestBus was changed to Hillsbus in the area which Route 700 operated.

In May of 2009, Route 700 was rerouted in the Westmead area, replacing part of rerouted 705, as a result of Ministry of Transport review of Region 4.

The service is operated out of the Hillsbus depot in Seven Hills. It has an average running time of 45 minutes outside of peak hours. It runs every 30 minutes between 6am and 11pm daily, with extra services in peak hours.