Route M91 operates between Parramatta and Hurstville via Granville, Chester Hill, Bankstown and Padstow. It commenced operation on 7 February 2011. 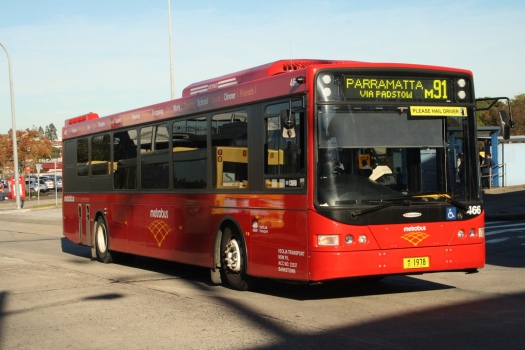 Bus services began along the current Route M91 corridor in June 1948 when Route 88 between Bankstown and Padstow commanded. In 1964 Route 88 was extended to Hurstville. In October 1992, Route 88 was renumber 948. Route 320 operated between Parramatta and Bankstown via Chester Hill, beginning operation in February 1980. It was renumbered 910 in July 1987. Route M91 replaced Routes 910 and 948 in February 2011, taking strain off the heavily congested Bankstown Interchange.

In the 2013 “Sydney’s Bus Future” report, the M91 was designated as a rapid route, with priority to be given in terms of bus priority infrastructure and timetable upgrades.

The M91 runs every 10 minutes during peak periods, 15 minutes during off-peak weekday periods, and 20 minutes on weekends. It operates between 6am and 8pm daily. It is operated by Transdev using 12.5m buses out of their Bankstown, Kingsgrove, Menai and South Granville depots.