Customers travelling to and from Western Sydney and the Inner West can look forward to a boost of more than 300 extra weekly train services and better connections when the new train timetable is introduced later this year.
Premier Gladys Berejiklian and Minister for Transport and Infrastructure Andrew Constance today announced key improvements to both the T1 Western Line and T2 Inner West Line.
“This is a massive win for Western Sydney,” Ms Berejiklian said. “We are making it more convenient for customers to travel between Western Sydney, the Inner West and Sydney’s CBD.”
“By simplifying and modernising parts of the network we are able to achieve far better services for customers.”
Key improvements to the Sydney Trains network include:

“We know that customers travelling longer distances want faster services and those closer in want to just turn up and go – we can achieve this,” Mr Constance said.
“These are the some of the busiest lines on the network. By simplifying the way the lines operate it will create additional capacity and reliability for customers.
“Today, we also unveil a refreshed network map so customers can begin to understand the changes ahead. They include the T2 Line extending to Parramatta and also to Leppington in the South-West. We’re also extending services on the T5 Line to Leppington and Richmond, along with re-badging the Airport Line to the T8 to distinguish this popular service for tourists and visitors,” Mr Constance said.
“With total rail trips to and from Western Sydney set to grow by 20 per cent by the early 2020s, it’s critical we get on with it and act now.”
Other key changes for T1 Western Line and T2 Inner West customers include:

This is the next step in the ‘More Trains, More Services’ program – a capital investment of over $1.5 billion to provide an urgent uplift in customer service on Sydney’s rail network. 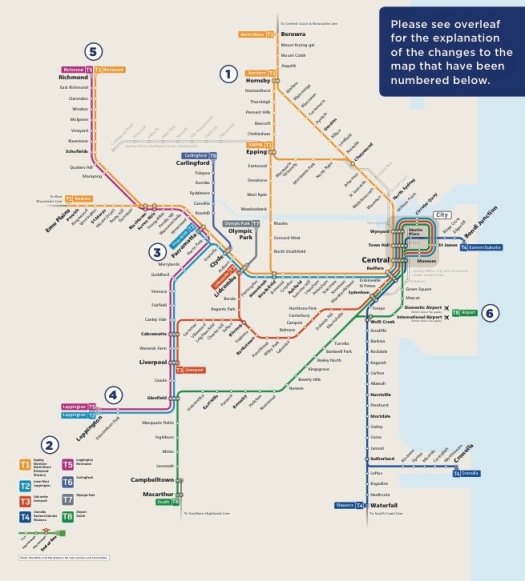