Today Minister for Transport and Infrastructure Andrew Constance released the Future Transport Strategy 2056. This strategy allows for commitment  to many major public transport initiatives over the next few decades. These new projects are in addition to this already announced as part of Sydney Metro, Sydney Light Rail and the Western Sydney City Deal.

“By 2056, NSW will have more than 12 million residents and we want to improve public transport and roads so that by 2056, 70 per cent of people live within 30 minutes of where they work or study. For Sydney, people want more public transport projects committed to and work on major projects  started sooner,” Mr Constance said.

In response to feedback, the NSW Government today committed to:

In the longer term, the NSW Government will:

The report has the proposal to implement the projects through the development of  City-Shaping, City-Servcing as well as Centre-Connecting transport networks. The city shaping network will form the backbone of the transport network, with all day frequencies of  5 minute or better.  The City serving network provides high capacity short distance connections to the CBDs with a frequency of 10 minutes or better all day. Centre-connecting services help to ensure that all of services and major centres are connect and run at a high frequency with lower capacity services or on-demand. 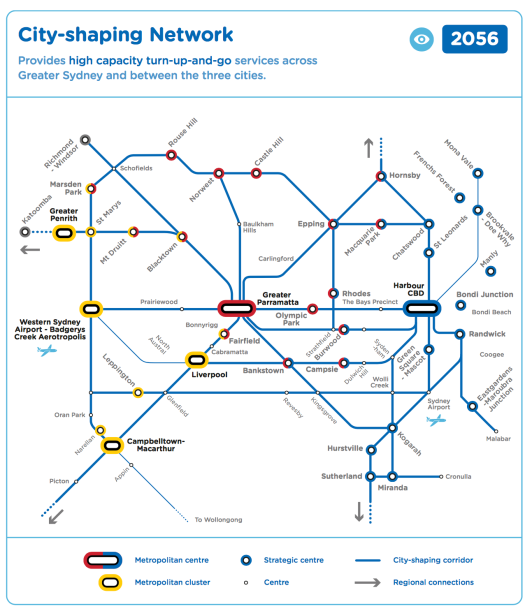 Building better connections between Regional centres and nearby communities is also a focus of Future Transport 2056, and traditional infrastructure will be upgraded with a new rail fleet on the way and potential electrification to Bathurst, Goulburn, Nowra and The Hunter.