The featured Bus Route for September 2019 is Route 870. Route 870 runs between Liverpool and Campbelltown via Glenfield and Ingleburn, and is operated by Interline. 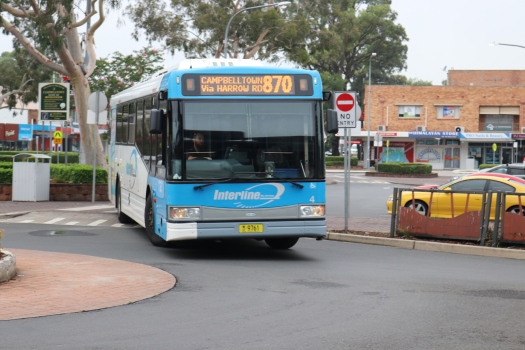 The current Route 870 has its history in a variety of different services that have been modified and amalgamated over the years. The earliest known predecessor dates back to an unknown date early in World War Two, when Route 94 began between Liverpool and Ingleburn. By 1952 Route 92 began servicing the corridor between Campbelltown and Ingleburn, with that service later renumbered and extended to Macquarie Fields as Route 102 in 1953.

After operating a variety of different exact routings under their 1925 system Route numbers (exact details are hard to determine), the routes were eventually renumbered into the Sydney Route Numbering System. Route 102 was spilt into a variety of different services, amongst them Route 870 between Macquarie Fields and Macurthur from 4 December 1983. Route 94 became Route 864 from Liverpool to Glenquarie and Route 866 from Liverpool to Ingleburn on 24 July 1995.

As part of the Ministry of Transport review of Liverpool and Campbelltown area routes, the decision was made to amalgamate routes 864, 866 and 870 into one new single Route 870 from 18 August 2008. This new Route 870 was joined operated by Busabout and Interline and operated along the current route between Liverpool and Campbelltown via Glenfield and Ingleburn. As part of the competitive tendering of Region 2, Interline became the sole operator of Route 870 from 1 July 2014.

Today Route 870 operates hourly between 6am and 9pm Monday to Saturday. It operates every 30 minutes during weekday peaks and every two hours on a Sunday.